Acquavella Galleries is pleased to announce Georges Braque: Pioneer of Modernism, a retrospective of seminal paintings curated by Dieter Buchhart, from October 12th through November 30th, 2011. The exhibition will include over forty major paintings and papiers collés by the artist, all on loan from prestigious international public and private collections. The exhibition marks the first major Braque retrospective in the United States since the Guggenheim Museum’s celebrated exhibition in 1988.

Best known as the co-founder of Cubism with Pablo Picasso and as the inventor of the papier collé technique, Georges Braque’s legacy is better understood in the context of his lasting influence on artists for the past century. “The purpose of this retrospective is to present the artist not only as the cocreator of Fauvism and Cubism but also as a profoundly passionate, progressive and influential painter all the years of his life, well beyond his early triumphs,” explained William Acquavella.

As a young man, Braque was a leading member of the Fauves, together with Henri Matisse, André Dérain, and Maurice de Vlaminck, before being inspired by the structured compositions of Paul Cézanne. This adherence to structure would guide Braque for the remainder of his career, especially during his close six-year collaboration with Picasso.

Together, Braque and Picasso invented a new aesthetic by portraying their subjects from multiple vantage points. They created a new pictorial world in which an object was deconstructed and then reconstructed on the basis of geometric criteria. They used forms that resembled geometric cubes, leading art critic Louis Vauxcelles to assign the name “Cubism” to the new movement. Still lifes became Braque’s preferred vehicle for innovation, and he was celebrated for instilling the most everyday objects with a profound spirituality usually reserved for devotional painting. Braque described his fascination with the genre, “A lemon and an orange side by side cease to be a lemon and an orange and become
fruit. The mathematicians follow this law; so do we.” In addition to fruit, other familiar objects such as tobacco pouches and musical instruments became frequent sources of inspiration.

At seventy-nine, Braque became the first living artist to be accorded a solo exhibition at The Louvre and was awarded state honors at his funeral in 1963. His work is held in the permanent collections of the world’s foremost museums including The Museum of Modern Art, New York; The Metropolitan Museum of Art, New York; Tate Collection, London; The Albertina, Vienna; The National Gallery of Art, Washington DC; The Art Institute of Chicago; The Solomon R. Guggenheim Museum, New York; Musée d’Art Moderne de la Ville de Paris; Kunsthaus Zurich; The Phillips Collection, Washington DC; the Centre Georges Pompidou, Paris; and the San Francisco Museum of Modern Art; many of whom have loaned work for the exhibition.

Georges Braque: Pioneer of Modernism will be accompanied by a 200 page hardcover catalogue which will include essays by Dieter Buchhart, Isabelle Monod-Fontaine and Richard Shiff. 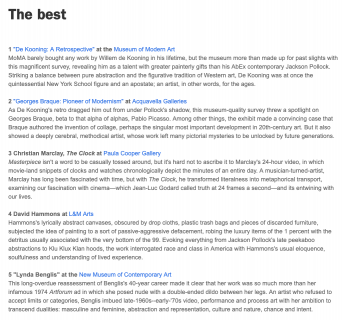 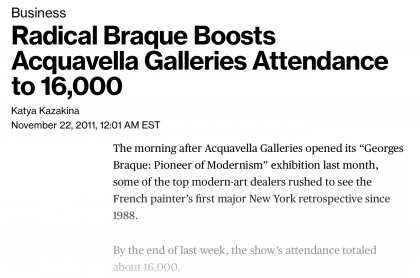 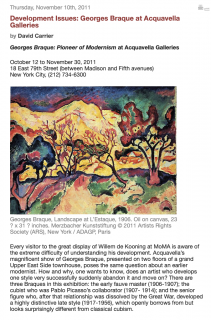 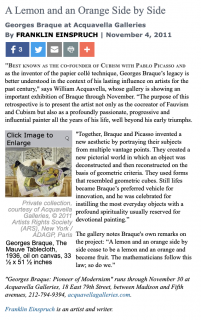 The New York Sun
A Lemon and an Orange Side by Side November 7, 2011
View More 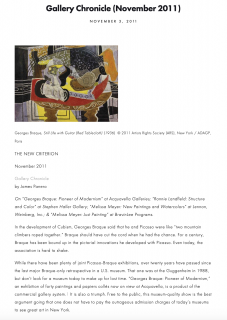 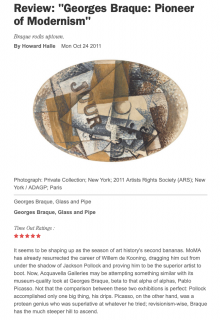 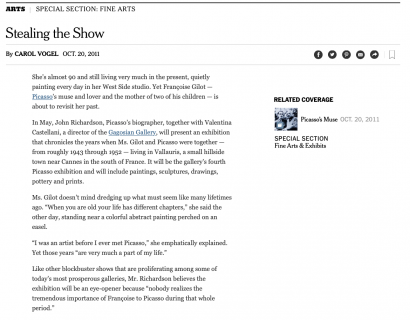 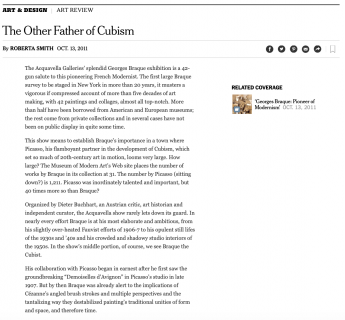 The New York Times
The Other Father of Cubism October 14, 2011
View More 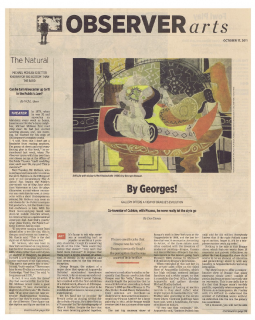 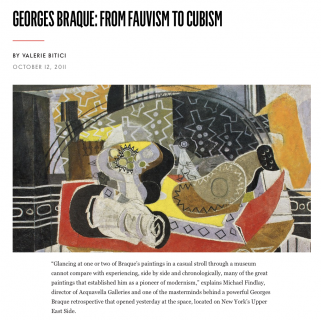 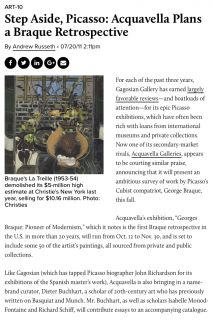