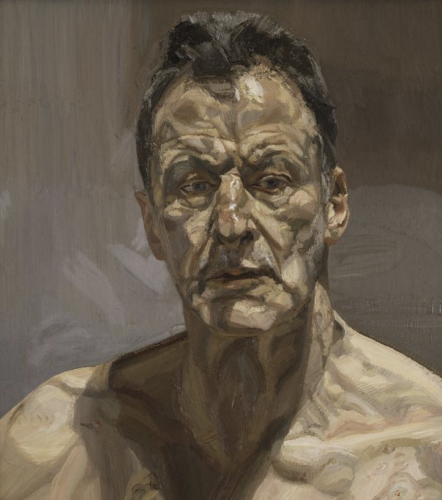 In a 2002 self-portrait, Lucian Freud (1922-2011) depicted himself as a gaunt figure, his plume of gray hair askew, one veiny hand clutching his scarf.

“He’s not giving you a heroic pose, and he’s not saying: ‘Oh, when you get old you’re wise.’ It’s none of that,” said David Dawson, a painter and photographer who was Freud’s assistant during the artist’s final two decades. “Instead, it’s more like: ‘Here’s a crumbling body.’”

One of Britain’s most celebrated 20th-century artists, Freud painted a host of arresting, fleshy nudes and turned the same merciless microscope on himself. About 50 of those paintings and sketches are in “Lucian Freud: The Self-Portraits,” which opens Oct. 27 at the Royal Academy of Arts in London and then moves to the Museum of Fine Arts, Boston, on March 1, 2020.

“He always told me he found it harder than anything to paint himself,” said Mr. Dawson, who set up Freud’s London studio daily and sat for eight of his paintings. “He did also say that he asked so much of his models that he felt he should do the same himself.” Mr. Dawson curated the show with Jasper Sharp of the Kunsthistorisches Museum in Vienna and Andrea Tarsia of the Royal Academy.

The grandson of Sigmund Freud, the founder of psychoanalysis, Lucian Freud was born in Berlin and came with his family to London as a boy in 1933; the city would be his home for most of his life. In “Man With a Feather” from 1943, a 21-year-old Freud depicts himself with prominent ears and hands, his pale skin a contrast with his shock of brown hair and dark clothes. The painting has Surrealist hallmarks, such as the whimsical bird and figure in the background.

But over time, Mr. Dawson said, Surrealism’s influence on Freud waned. “He only wanted to get his information from looking, and the more he looked, he felt he could never get enough information,” he said. “It was a way of always breaking down preconceived ideas—or how you think things are. But if you look and concentrate harder, something fresh might appear.”

In “Hotel Bedroom,” Freud painted himself and his second wife sharing cramped Paris quarters in 1954, when their recent marriage was already foundering. The artist painted himself standing off to one side, a hand in his pocket and a quizzical expression on his face. In the foreground, a wide-eyed, distraught woman lies in bed, head on the pillow and pale fingers at her cheek.

The style of Freud’s self-portraits changed after the late 1950s, when he began to work standing up rather than sitting down. He also replaced his sable paint brushes with hog’s-hair ones that were larger and could hold more paint. The precise, fine lines of Freud’s earlier work gave way to impasto, a thick buildup of oil paint that gives sections of some paintings—such as “Reflection,” a self-portrait from 1985—an almost sculptural feel.

Freud relied on mirrors when painting self-portraits and even depicted himself in a looking-glass in his 1967 “Interior with Hand Mirror (Self-Portrait).” He also tucked self-portraits into larger paintings. In “Interior with Plant, Reflection Listening (Self-Portrait),” from 1967-68, the canvas, which is almost 4 feet square, is dominated by greenery in a planter. Through the leaves, in the top left-hand corner, is a bare-shouldered Freud, one hand cupped behind his ear. Almost two decades later, in “Two Irishmen in W11,” Freud included two tiny unfinished self-portraits of his face, resting on the floor behind the title subjects, who are clad in dark suits and ties.

Self-portraits from the artist’s final years capture Freud’s mannerisms, such as tugging his scarf or raising a hand while speaking. In one picture, the artist’s head appears near his studio wall, which is stippled with paint scraped from his palette. Although unsparing in recording his face and body, Freud’s self-portraits “never become pathetic,” Mr. Sharp said. “There’s a defiance in that aging process.”

The atmosphere in his studio was peaceful, Mr. Dawson recalled, with “a very quiet, concentrated stillness where you sense something is happening.” The soft-spoken Freud worked intently but might chat with his sitter or murmur swaths of “The Rime of the Ancient Mariner” or other poetry he had memorized in school.

In his 70s, the artist took great pleasure in late-night phone calls with friends such as John Richardson, the art historian and Picasso biographer whom he had known as a young man in London. He and Richardson, who died in March 2019, “would chat away about the old days, and it was hilarious,” Mr. Dawson said. “Between them, they lived the 20th century and knew anybody worth knowing in the 20th century.”