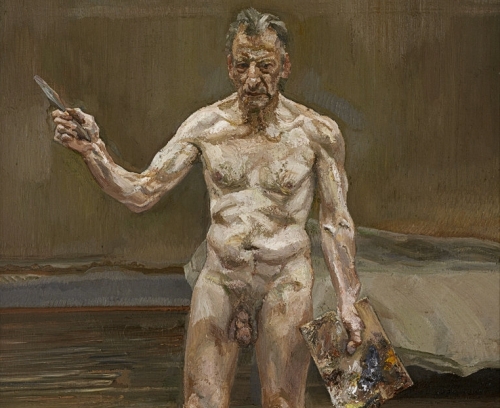 In 1993, the British painter Lucian Freud, who had just turned 70, took on one of the boldest projects of his career: producing a full-length portrait of himself in his birthday suit. He stood naked and painted in the top-floor London studio where he had spent so many of his waking hours.

“Painter Working, Reflection,” is now considered by critics and art historians to be his greatest self-portrait. It shows him standing in unlaced boots, facing the viewer and brandishing his palette knife the way an aging warrior would a dagger.

“I felt very uneasy doing it,” he told an interviewer just before the painting was unveiled. “Seldom got so fed up with a model. But I thought, after putting so many other people through it, I ought to subject myself to the same treatment.”

The portrait was a highlight of the Freud exhibition that opened at the Metropolitan Museum of Art in December of that year. And it is sure to be a highlight of “Lucian Freud: The Self-Portraits,” which will be at London’s Royal Academy of Arts (Oct. 27 through Jan. 26), before opening at the Museum of Fine Arts in Boston on March 1.

The exhibition brings together more than 50 Freud self-portraits- paintings, drawings and etchings – from public and private collections, some of which have not been seen in public for years. It is loosely chronological and organized in six sections.

The show was first proposed to the Royal Academy by Mr. Freud’s longtime studio assistant (and frequent portrait subject) David Dawson, who had discussed the idea of such an exhibition with Freud on several occasions. The artist died in July 2011 without seeing the result, and no such exhibition had been attempted until now.

The self-portraits “have never been brought together and evaluated as a stand-alone element of his practice,” said the Royal Academy’s Andrea Tarsia, who has curated the show with Mr. Dawson and Jasper Sharp, an adjunct curator for modern and contemporary art at the Kunsthistorisches Museum in Vienna.

Throughout history, artists – and perhaps most famously, Rembrandt – have regarded self-portraits as a visual road map to their psyche. They are an occasion for extreme introspection, a chance to reflect on the meaning of life, the passage of time and the approach of death.

Yet Freud – despite being the grandson of Sigmund Freud, the founder of psychoanalysis – had a different attitude toward the genre, according to those who knew him. Self-portraits were chiefly a way for him to experiment with the medium of painting.

“Lucian was extremely interested in other people,” said Martin Gayford, an art critic who knew the artist well and spent 18 months posing for a Freud portrait, later describing the experience in a book (“Man with a Blue Scarf: On Sitting for a Portrait by Lucian Freud”).

“He wasn’t tremendously wrapped up in his own psychology,” Mr. Gayford added. “He’d say, ‘I’m not very introspective.’”

What motivated him, rather, was the constant need to “change and evolve and not repeat himself,” Mr. Gayford said. The self-portraits, then, are “not psychological analyses of himself, they’re about the odd process of observing oneself.” And they are, in Mr. Gayford’s assessment, an important “subcategory” of his art.

Mr. Tasria agreed that the artist was “quite reticent in talking about himself. He didn’t talk about his influences and didn’t really discuss his private life very much.”

Nonetheless, Freud spent most of his life producing likenesses of himself, starting in his late teens. He painted a self-portrait for every meaningful milestone in his life (such as big birthdays).

Given his personality, “this kind of recurring element of self-portraiture might seem a little bit surprising,” Mr. Tarsia said. His self-portraits, as a result, had a certain “elusiveness” about them and often involved “a kind of game of hide and seek,” he added.

The first self-portrait was painted in 1943, when Freud had just entered his 20s. “Man With a Feather” (also in the show) is nothing like the thick, impastoed canvases of his late years. It’s a thinly painted, neatly drawn figure of a young man in a dark jacket who holds a feather as if it were a quill, and who avoids gazing directly at the viewer; there is something surreal and slightly eerie about the composition.

What is characteristic of Freud’s self-portraits is that they were painted using mirrors, not photographs. Hence the use of the word “Reflection” in many of his titles, Mr. Tarsia said.

Mirrors allowed him to be playful and “sneak into portraits of others,” as well as “juxtapose different spatial configurations,” Mr. Tarsia added.

There are plenty of examples of this playfulness in the show. In the 1965 “Reflection with Two Children (Self-Portrait),” the towering figure of the artist, dressed in a gray suit, peers down at the viewer. It was painted by putting the mirror on the floor. The tiny heads of two children appear, seemingly out of nowhere, on the canvas.

In the 1967-68 “Interior with Plant, Reflection Listening (Self-Portrait)” the small mirror image of Freud’s face and torso peeks out from among the cascading leaves of the plant.

The exhibition ends with two self-portraits that were completed between 2002 and 2003, less than a decade before the artist’s death at 88. In these, Freud is examining the passage of time and its effect on his physical appearance – but without lapsing into sentimentality.

“Lucian was quite interested in the process of aging and he certainly dwelled on signs of aging himself,” Mr. Gayford said. But essentially, “he welcomed them for their visual possibilities.”

In the end, it is painting that mattered the most. “I don’t want to retire,” he once said. “I want to paint myself to death.” And that’s more or less what he did: It wasn’t until two weeks before his death that he finally laid his brush to rest.