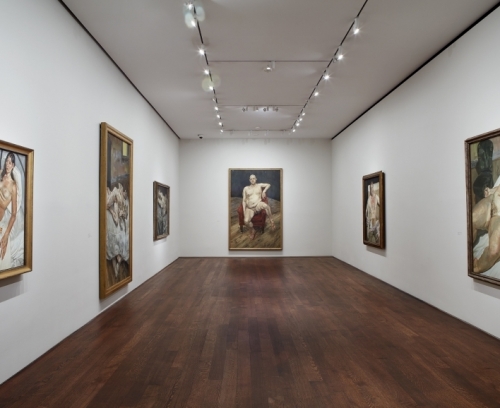 Lucian Freud at 18, his head ballooning out of the frame, flat-faced, a glint in his eye where the light catches the varnish. His eyebrows are millipedes. Then Lucian in 1943, big eared, gawky, oddly calm, a white feather in his hand.

With each work in this exhibition of Freud’s self-portraits we witness an increasing occupation of his own portrayal, the person moving in and taking up residence in his own unstable image – the one he’s been given and the one he’s making for himself. Sometimes we see Freud in glimpses, or peering around a corner, uneasy but knowing. Then he’s hanging about by a street-lamp, beside a wall surrounding a big house. I hear a lonesome harmonica, and imagine him reaching into his pocket for a packet of Strand cigarettes. (“You’re never alone with a Strand,” the advert went.)

Once, he’s only a shadow, cast on the bed where his model lies naked. Like a strain or trace evidence, this looming, enlarged patch of grey on the sheet almost isn’t there, while everything else in the painting is solid; the woman on the bed is raw and fleshy. This shadow puts us in the painter’s place, hovering invisible over a naked woman. It looks like a movie murder scene; I think of Sickert, and Alfred Hitchcock’s Frenzy. A whole section of this exhibition is devoted to works in which Freud’s own presence is secondary: two small self-portraits sit at the bottom of a wall in the background to his portrait of two Irishmen in their suits. My eye wanders past and out of the window in the background to the open-skied views of west London’s stuccoed streets and tower blocks beyond. Is he misdirecting us?

These glimpses are always more than incidental, even when all we see are his pacing shoes beyond his sitter, caught in the studio mirror as he turns between the canvases and his model. You think you hear the sound of his feet. And then a bit of his leg, reflected dim in the window between the blind and the sill, as his son Freddy, naked and stark, stands in the corner of the room.

Sometimes he is cropped and sometimes unfinished, incomplete, his face petering out into smears and lost brushstrokes. In their way these false starts are as complete as any portrait gets. He is always beginning again. “When I see photographs of painters staring into the distance I always think “What complete cunts. I don’t want to be one of those,” he once remarked. I don’t think he wanted to be one of those painters who portray themselves all constipated and brow furrowing, smug and supercilious either. Even when he is at the centre of things, he’s unknowable.

Freud is a great self-dramatist, and seems to take pleasure catching snatches of himself in mirrors, peering between the foliage of a pot plant, looming and menacing like a 1960s London gangster, then suave and louche, or a sly old git, fixing us from the corner of his eye with a horrible knowing glance as he passes by. Shit happens to us and around us, in paintings as well as life. Accidents and mistakes pile up, just like that thick, coarsely-ground, granular and poisonous lead white Freud used in his later work.

Hell isn’t just other people. One must include oneself and one’s own body in this comedy of errors and terrors and that’s what Freud does. Then, later, naked in the studio, he raises his palette-knife aloft with a kind of comic defiance. Along with the sallow sagging skin he is a mess of revisions and repaintings, the pigment piling up and moiling over his cock and balls, the face redone and done again.

Freud may have resisted his grandfather’s influence on his own paintings, but both worked in self-consciously contrived rooms where other people have secrets to tell. In Freud’s paintings the secrets are the ones the body tells, rather than the things they say. How complicated, how fascinating it all is.