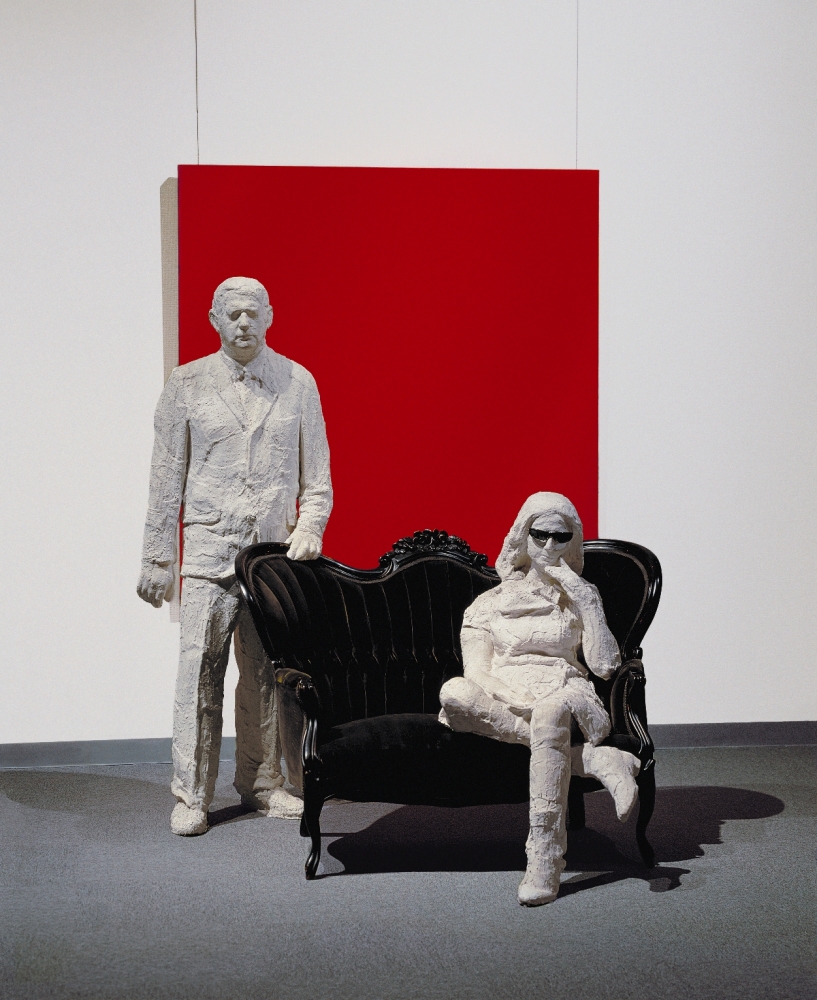 A half-century ago, before the phrase “Pop Art” was even coined, a taxi tycoon named Robert C. Scull started buying up dozens of works by artists like Jasper Johns, Robert Rauschenberg and Andy Warhol.

When Mr. Johns had an exhibition at Castelli Gallery, and none of it was selling, Mr. Scull bought the whole show. He commissioned Warhol’s first portrait. He gave James Rosenquist his first sale after a visit to his studio. He gave John Chamberlain enough money to let him quit his hairdressing job and focus exclusively on being a sculptor.

As much as anyone, Mr. Scull and his wife, Ethel — a fashion plate and socialite whom everyone called Spike— created the market for Pop, making it the occasion for lavish parties, an emblem of high society and the new face of art in the 1960s.

Then, in 1973, they auctioned off a huge chunk of it — 50 paintings and sculptures — and walked away with $2.2 million, dozens of times more than they had paid.

Much of the art world was scandalized. New York magazine’s art critic railed at the “banal, nouveau riche” Sculls, whose “greed,” “shamelessness,” and “sheer, unadulterated chutzpa” killed contemporary art “not with a whimper but with a bid.”

Soon after came the divorce, a vicious court battle that raged for 11 years and ended — after Robert’s death at 70, in 1986 — with another auction, of the Sculls’ remaining 142 works. It brought $10 million, much of which went to pay lawyers and tax collectors, and scattered the art collection across the world.

In the mid-1960s, Tom Wolfe had profiled the Sculls as “the folk heroes of every social climber who ever hit New York.” By the time Ethel died, at 79, in 2001, they were remembered mainly, if at all, for the gossip and the uproar.

But now Acquavella Galleries, on the Upper East Side, has gathered 44 of the most striking works from their collection, on loan from 11 museums, 2 foundations and 22 private collectors in five countries. The museum-style show amounts to less than one-fifth of what the Sculls bought through the years, but it may be enough to rehabilitate the couple’s reputation.

The art critic and historian Irving Sandler once wrote that he liked the Sculls because “they were vulgar, knew it, and didn’t give a damn.” But in a recent interview he added that Robert “was one of the only people at the time who understood this art.”

“It’s a major collection,” he said.

Certainly the exhibition and the lavish catalog, written by its curator, Judith Goldman, make the case that Robert Scull was one of the greatest collectors of American art, maybe the most perceptive of the postwar era.

He grew up poor on the Lower East Side, the son of a garment district worker and a homemaker, Jewish immigrants from Russia. At 10, his life changed when his grandfather took him to the Metropolitan Museum of Art. He started taping posters of his favorite paintings on his bedroom wall. He studied drawing at the Art Students League, but had to quit to earn a living.

“He was a frustrated artist,” said Jonathan Scull, his oldest son, now 62 and the owner of a home entertainment marketing firm. “He had a big ego, and he was an aggressive collector. But he bought all that art because he was crazy for it, and nothing was going to get in his way.”

Robert Scull had the eye for art; Ethel supplied the seed money. Her father was the original taxi magnate, and when she married Robert, in the mid-1940s, he gave his son-in-law half of the fleet. Scull expanded that into an empire of 135 cars, 400 drivers, and a lucrative taxi insurance business.

By the mid-1950s, he had enough money to buy serious art, focusing on Abstract Expressionism. (The Acquavella show has a few of these paintings.) But he’d come late to this movement, and when he saw the Jasper Johns show at Castelli, he knew right away that this art was the art he wanted — art that, as he put it in a 1964 interview, portrayed “what we really are” in “one bright, luminous and concentrated thing, whether a beer can or a flag.”

He befriended the young Pop artists, spent weekends at their downtown studios and bought their art when they could barely afford to pay rent. Within the next few years, Pop caught on as the next big thing among the city’s cultural tastemakers, who suddenly realized — to their delight or horror — that the realm was already dominated by this loud-talking, cigar-chomping, Jaguar-driving taxi king and his wife, who modeled Dior and Courrèges in Vogue.

The shock of the ’73 auction stemmed not just from Mr. Scull’s sky-high profits but from the realization that this art, which some still saw as a fad or a goof, possessed enduring value.

After the auction, Rauschenberg, who later admitted that he had been drinking, shoved Mr. Scull in the chest and berated him for making so much money off his hard labor.

Not all the artists were angry. When Mr. Johns heard about the results, he and his crew took a break from making lithographs to uncork some Champagne. He knew, as Mr. Scull tried to explain to Rauschenberg, that the high prices would mean higher prices for the works he was making now. Roy Lichtenstein, who had also sold some paintings to Mr. Scull, said of Rauschenberg’s reaction, “What did he want, the work to decrease in value?”

Mr. Sandler said that, more than any other single event, the ’73 auction “kicked off the art market that we know today.”

Jonathan Scull, who lives in a rent-controlled apartment in Chelsea, has held on to a few small works from the golden years, but not many. The night before his bar mitzvah, in 1961, Mr. Johns gave him a sculptured painting of a fountain pen, engraved with his and Jonathan’s initials.

“The lawyers got it,” Mr. Scull said, adding with a slight laugh, “I don’t like to think about it.

“Sometimes,” he said, “I feel like calling up David Geffen to ask if I can come over and look at my childhood.” For the next month, he can just take the No. 6 train uptown.

A version of this article appears in print on April 10, 2010, on Page C1 of the New York edition with the headline: Showing a Couple’s Eye For Art (and Money).

Full Article
Back To Top