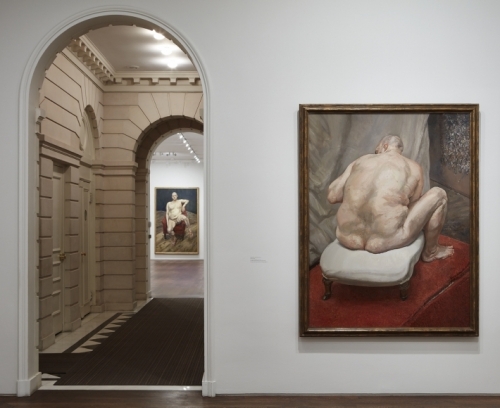 The last time I wrote about Lucian Freud was for The Artist’s Magazine to coincide with a retrospective of his work in 2012. Given the magazine’s demographic, my impression was that the editor thought twice and bit her lip before approving the assignment. The resulting torrent of angry reader correspondence (one e-mail called the paintings “soft core pornography”) was so voluminous that it spilled across the next few issues. Some months later I ran into a fellow instructor at the League, who related that he’d submitted an article soon afterward. Because it included an image of a nude, the magazine shelved it, at least until the Freud backlash blew over.

Freud prompts polarized reactions. Some painters admire him for reasons that are obvious to painters, i.e., his command of the medium, while others think him vulgar, or worse. I find less than persuasive the quote that Acquavella Galleries—the host of a current show on the Upper East Side—has chosen as a sort of mission statement, and, perhaps, a defense of Freud’s obsession with the nude. It reads, in part, “Being naked has to do with making a more complete portrait, a naked body is somehow more permanent, more factual… When someone is naked there is in effect nothing to be hidden.” Nudity doesn’t make for “a more complete portrait,” any more than a winter landscape, shorn of foliage, is in some way a truer version of nature. People are perfectly capable of deceit while nude; if I’m not mistaken there’s an entire commandment devoted to that. A more credible motive would be to place a non-professional model in a position of emotional vulnerability. That interaction is implicit in a number of Freud’s figures, and explicit in Flora with Blue Toe Nails, where the painter’s shadow rises, creepily, onto the bed upon which an apprehensive young woman reclines. There is no more unsettling explanation for posing in the altogether than that which was provided by one of Freud’s daughters, who said it was the only way she could spend substantial time with her father

Substantial time is a key element in the large, late paintings. But the months Freud spent on each of these figures were devoted less to personality than they were, most assuredly, to the relentless observation of tactile elements. Skin, rugs, upholstery, chairs, wood-grained floor and wadded-up paint rags all receive the artist’s full attention. I was asked if his thick surfaces are “lush,” but his well-known use of cremnitz white produced an encrusted effect, like Courbet on steroids. His paint surfaces are a contradiction, simultaneously sensual and scabrous. They don’t always work. In several figures, the paint is applied to legs with a large brush in unbroken lengthwise strokes, transforming muscle and bone to flesh-toned wood. For Naked Solicitor, the foreshortening of the figure—Freud savored awkward dispositions of the body—is rather too reliant on cross-contour strokes. In Ria, Naked Portrait, pigment accretes at an eye socket and projects an inch from the surface of the canvas. Artists with enormous appetites are apt to err generously.

These examples are the exception rather than the rule. Mostly, his handling of paint is a tour de force. I was not the only artist to post details of Freud’s canvases to social media last week—the slathering of pigment inspires fetishistic admiration among some painters. His method, never advisable for the less gifted, was to work from one section to the next, assembling the image piecemeal. The pieces cohere, as in complex works like Large Interior, Notting Hill. It is an odd composition, with David Dawson, Freud’s longtime assistant and curator of this show, filling in for an absent female model and breastfeeding a baby at the rear of the space. In the foreground sits author Francis Wyndham, on a couch as satisfyingly weathered as his face. By virtue of age and gravitas, his is the most interesting presence in the show. In a canvas filled by richly considered surfaces, Wyndham’s hand, its thick pink, splayed fingers extended against an equally dense white book cover, nearly steals not only the painting but the show.

For the painter, the conundrum of nudity is that it tends to lose its frisson unless it has some counterpoint. Skin itself doesn’t usually offer a lot of variegation. Freud was very good at providing the necessary context to keep things moving, either by juxtaposing flesh with fabric—the paintings of Sue Tilley, for example, which are among my favorites—or through tonal and color shifts within the figure. It is the latter quality, abetted by vivid brushwork, which was almost uniquely Freudian. The ground of British art was well cultivated when Freud arrived; Walter Sickert’s nudes established a mood of tawdry indolence, Stanley Spencer’s later portraits and figures introduced the almost morbidly faceted forms that presaged Freud’s mature style, and a close friendship with Francis Bacon famously inspired the preference for a loaded brush. Freud synthesized these strains and narrowed his vision which, devoted though it was to portraits and figures, exists outside any academic school. He made copies after Chardin and Constable and referenced Watteau and Cézanne in group portraits, but there isn’t much obvious homage paid to old masters. His figuration is blessedly free of doctrine—he wasn’t making a statement on behalf of realism, yet he did revitalize figure painting. He referred to himself as a romantic artist, and it’s true when you look at the restless sprawls of his models and the skeins of impasto employed in their rendering, and compare them to the geometry of London’s other connoisseur of the body, Euan Uglow. The first of Freud’s “monumental” nudes, a bigger-than-life figure of Leigh Bowery, is marked with seams where the canvas was enlarged, signposts of an expanding idea. Both of the model’s feet are seen in their entirety only because of the added linen (the foreshortened legs in the Bowery portrait are examples of Freud’s mastery of sculptural draftsmanship). Little wonder Freud appealed to Robert Hughes, a sort of parallel literary spirit, who called him “The greatest living realist painter.

It’s necessary to distinguish “realist” from “realistic,” and a photograph of Sue Tilley in the accompanying catalogue is instructive. Holding the pose for Benefits Supervisor Sleeping, her skin appears smooth and the undulations of her gesture, relatively flaccid, if not serene. By contrast, the painting is a veritable landscape of tensile push and pull. Freud’s realism was heightened, not in a photorealistic way, but through color, paint manipulation and, most crucially, the observation of human anatomy that allowed him to exaggerate shifts of tone, suggesting plane changes more dramatic than what’s visually perceptible. He did all this well enough to create a convincing alternative realism, one comprised of skin at once luminous and leathery. For all their elaboration, Freud’s bodies are no more naturalistic than, say, those of Rubens, with which they sometimes share an unexpected majesty. They are the most palpable suggestions of human form we have. It’s hard to imagine an artist taking the idea further, short of tinted sculpture.

Freud’s love of the tactile accounts for both the works’ strength and dearth. Whether they please or offend our sense of touch, they are undeniably “felt.” His paintings and etchings are evocations of bodily weight and muscular response to seated and supine positions, and to the ennui that accompanies prolonged modeling sessions. The issue isn’t nudity, and it certainly isn’t pornography. The problem is the insistence on the abundant stuff of the physical world. Every square inch of his paintings is dense with the tangible. The charm of such visceral topography has its limits. Of course, if one need be refreshed by the poetic impulse, the Met is a few blocks away. After experiencing Freud in all his vigorous glory, a chaser of Rembrandt and Corot may be in order.