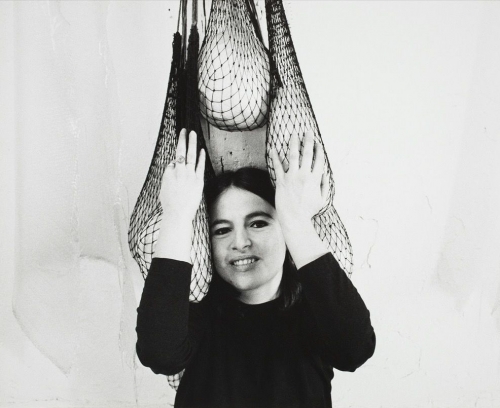 Eva Hesse refused to see sexuality in her sculptures. While her critics and interviewers suggested that her raised, rounded forms conjured up images of breasts and that her gridded washers implied female genitalia, Hesse merely conveyed her interest in the shape of a circle itself. She claimed she wasn’t specifically engaged in ideas of eroticism, but in absurdity.

“I think the circle is very abstract,” she told art historian Cindy Nemser in a 1970 interview. “I could make up stories of what the circle means to men, but I don’t know if that is conscious. I think it was a form, a vehicle. I don’t think I had a sexual, anthropomorphic, geometric meaning.”

“I have confidence in my understanding of the formal.…Those problems are solvable, I solve them, can solve them beautifully,” she once said, showcasing her confidence in her ability to work within the rigorous aesthetic paradigms of her day (think: Donald Judd’s extensive writings on what art should be).

Wilke also riffed on the strictures of Minimalism, arranging clay and chewing gum into gridded arrangements. Yet unlike Hesse, she embraced “erotic” readings of her work from the beginning. She made terracotta sculptures with ovular openings in the top, which she called Five Androgynous and Vaginal Sculptures (1960–61). She contorted her erasers and gum into clearly labial shapes. In a letter to the New York Times, she once wrote, “Vaginal imagery represents the only universal symbol of creation and the most important function of human existence [so] the unique possibilities of a new women’s art within the formalist convest of a female iconography are infinite.”

In other words, where Hesse saw the pitfalls of working in an explicitly sexual, feminist vein, Wilke saw possibilities. In the Acquavella exhibition catalog, Nairne offers this caveat: “The danger was that an artwork could get caught in this yonic honey trap; stripped of any subtlety or imminence of meaning.”

Interestingly, Wilke did indeed worry about how critics would view her work in relationship to her body—but in a very different way than Hesse did. It wasn’t her sex that Wilke didn’t want read into her art, but her appearance itself. According to Nairne, Wilke feared that in her films, in which she appeared naked, “her beauty would blind any acknowledgement of the formal qualities of her work.”

Hesse and Wilke are hardly the only artists to fear that their artworks will be judged or categorized by the facts of their own bodies. Yet perhaps the larger issue is what kinds of identities, and bodies, the art world takes for granted. In a recent conversation I had with curator Helen Molesworth, she suggested that maybe the problem isn’t that we identify artists by their demographics, but that we’ve failed to look at these demographics when they apply to white men. If we’re going to talk about Hesse and Wilke in terms of eroticism and femininity, maybe it’s worth taking a harder look at how phallocentrism played a role in their male contemporaries’ work—and how whiteness itself played out across the entire Minimalist movement.

Eroticism, of course, isn’t simply the domain of female artists. In the case of Hesse and Wilke, Nairne finds an eroticism that responds to something universal: anticipation of death. Both artists died of cancer at early ages (Hesse at 34, Wilke at 52).

“I’m interested in how their experiences of death might have sparked an interest in the psychic drives and a kind of eros that emerges in their work as a counterpoint to thanatos,” Nairne said recently. 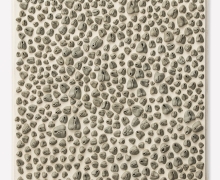 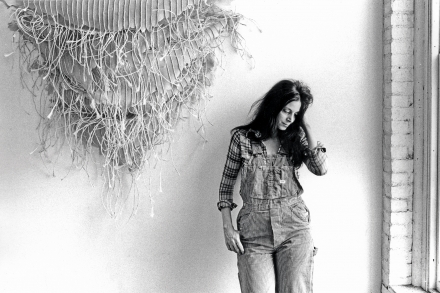