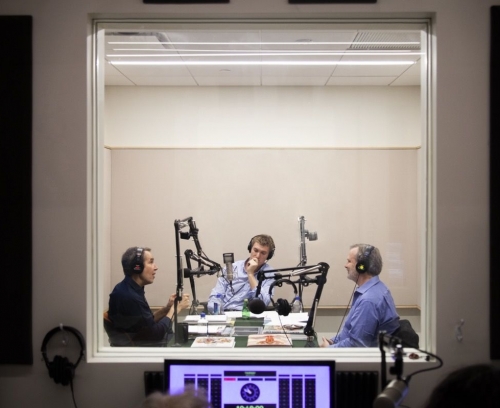 During the VIP preview of Frieze New York in May of this year, as temperatures in the fair’s tent soared uncomfortably high, gallerist Sean Kelly and collector Marieluise Hessel Artzt spent more than half an hour sitting at a table in the corner of the dealer’s booth. But they weren’t hammering out a deal or negotiating a discount—they were recording a podcast. Their wide-ranging conversation became the third episode in Kelly’s podcast, “Collect Wisely.”

“The point of [recording at Frieze] was actually to show how committed we were to what we were doing with ‘Collect Wisely,’” Kelly says. “The first day, as everybody knows, is the most important day of an art fair, it’s when all the most important clients come through. And you would think, ‘My god, what the hell is Sean Kelly doing sitting in the booth talking to people and doing a podcast?’ Well, that was the very point.”

Kelly’s podcast offers rare and candid access to major art collectors, typically discreet power players who share their collecting experiences and philosophies with the dealer. It is part of a recent podcast boom among commercial galleries—including David Zwirner, Galerie Lelong & Co., and Acquavella Galleries—who consider them an extension of more established forms of the mythmaking they have historically engaged in through monographic publications, catalogues, or press promotion. In the “print is dead” era, podcasts offer a channel to new and younger audiences, while also producing a type of art-historical scholarship better suited to the 21st century.

“The audio file can be a document to be preserved alongside artist-related articles, books, videos, even the artworks themselves,” says Ryan Leahey, director of digital content at Bower Blue, which helps produce Galerie Lelong and Acquavella’s podcasts. “[Galleries] can speak with great authority, with great knowledge, and with great ease about their artists and exhibitions. Really, then, it becomes an in-house editorial operation.”
The intimacy and authority of the podcast format is not a new phenomenon in the art world, even if galleries are relatively late adopters. Art publications from Artsy to The Art Newspaper and Hyperallergic have produced podcasts for years, as have many major institutions, from the Museum of Modern Art’s “A Piece of Work” series to the Tate’s “Walks of Art” podcasts. Even auction houses have them, like Sotheby’s “In Other Words,” and many art fairs record their public talks and release them as podcasts; this week, the Untitled art fair launched one of its own. For galleries, though, their conversational tone makes them a less intimidating entryway to their artists’ work than, say, a hardbound exhibition catalogue filled with theoretical “artspeak.”

Kelly’s podcast, the first among the recent boom to launch, is distinctive for its collector-centric approach. Guests have included Dutch sisters Monique and Myriam Vanneschi, the American couple Jill and Peter Kraus (who have donated works to the Hammer Museum and MoMA, whose board Jill sits on), and Rodney Miller, who serves on the board of trustees of the Studio Museum in Harlem and collects work by artists of the African diaspora.

“I do think that the format of two people in a room with a microphone…facilitates a kind of intimacy,” Kelly says. He adds that he edits out any discussions of artists his gallery represents. “This has to be kind of pure for it to work. It to be a very clean situation for it to have any validity. The point of ‘Collect Wisely’ is not to criticize any colleagues or anybody in the industry, it’s just to say, ‘Look, the only conversation cannot be about investment value.’ If that is what this conversation gets reduced to, we are all being impoverished and the game is up, it’s finished.”

About two months after the launch of the “Collect Wisely” podcast in April, David Zwirner released the first episode of its “Dialogues” podcast. Hosted by the mega-dealer’s son Lucas Zwirner, it features a conversation between artist Jeff Koons and Metropolitan Museum of Art curator Luke Syson. The Zwirner podcast, now in the home stretch of its first eight-episode season, has featured conversations between photographer Stan Douglas and jazz musician Jason Moran, painter Lisa Yuskavage and filmmaker Tamara Jenkins, artist Marcel Dzama and Arcade Fire member Will Butler, and, most recently, writers Peter Schjeldahl and Jarrett Earnest.

“A lot of people are making what we now refer to as ‘content,’ and it’s not like you just want to contribute to the content deluge, you want to make something that actually has an audience, that people actually want to listen to,” Lucas Zwirner says. He sees the podcast format as a powerful addition to the gallery’s program, complimenting its exhibitions and its publishing enterprise, and with the distinct potential to reach new, younger audiences around the world.
“There’s a whole generation of people growing up more listening to podcasts than reading books,” he says. “You’ve got a physical space, and how many people can come in over the course of a week, a couple thousand? Well, over the course of a week, 10,000 people can listen to your podcast. So you create a space that then allows for so much more access.”

Zwirner says that the podcast’s episodes have been downloaded over 100,000 times since it launched in June, far outpacing the preliminary projections of Slate Studios, which helps produce them.

Podcasts’ potential to bring galleries new audiences was also a selling point for Galerie Lelong & Co., which launched its own, entitled “Viewpoints,” last month. Its first episode is a half-hour conversation between gallery vice president and partner Mary Sabbatino and the artist Petah Coyne, whose exhibition with the gallery closed last week. Like Zwirner, Sabbatino considers the podcast a powerful vehicle for developing new audiences, even if there isn’t necessarily a commercial payoff.

“We don’t see it as directly sales- or promotion-related, that someone will listen and call the gallery and say, ‘Hey, I’d like to buy this art,’” says Sabbatino. “We see it as part of the mission of serving the artists’ goals, and most artists want their art to be widely known, recognized, and understood. This is another way that the artist’s vision can be communicated very intimately right into your ear, to you alone, and I think there’s a nice quality when you hear a good podcast, as if the people are speaking directly to you.”

Lelong’s podcast is produced by Bower Blue, the same content agency specialized in design and visual art that is working on Acquavella Galleries’s new podcast, “The Picture,” which launches this week. Every episode of “The Picture” will open with an introduction from gallery director (and former Met Museum director) Philippe de Montebello. The first episode features Bill Acquavella discussing Lucian Freud with the late artist’s assistant and friend, David Dawson.
“There’s something immediate and unvarnished about two people having a conversation, even when edited,” says Leahey. “The conversations we capture in these podcasts have characteristics you can’t read or see anywhere else, and I think galleries, just like listeners, appreciate the format’s uniqueness.”