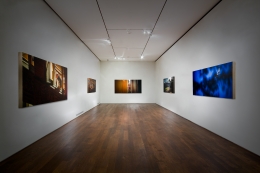 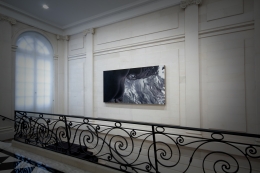 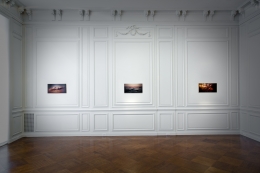 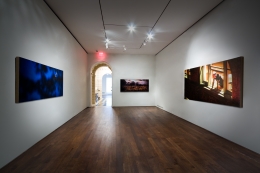 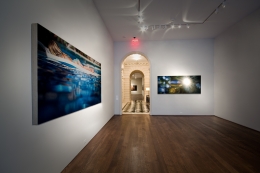 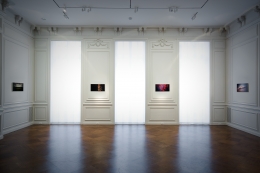 New York, NY (July 2008)—Nearly 20 new paintings by the American artist Damian Loeb (b. 1970), known for his "hyper-realistic paintings" created from collages of found images and still frames from classic movies, will be shown at Acquavella Galleries from September 5 through October 7, 2008, to launch the fall season there. Inspired by his fascination with film, television commercials and photography found in popular culture, Loeb takes fleeting images, changes their context and recreates them in a way that reveals the true depth of their ominous undercurrents in his work. The terminology in the exhibition's title, Synesthesia, Parataxic Distortion, and the Shadow: A Show of Paintings by Damian Loeb, comes from the titles for three of the smaller (12 x 24 inches), oil-on-linen paintings featured in the show; all of which pertain to psychological terms that either directly reference ideas of perception and subjectivity or refer to emotional states that can affect observation.

"Damian Loeb is one of the most innovative figurative painters of his generation. By hand-painting striking images sourced from diverse aspects of today's technological culture, he successfully combines skill and imagination," said Alexander Acquavella, a director of Acquavella Galleries.

The artist, an avid fan of cinema, is influenced by the "constantly evolving visual vocabulary" found in the movies he loves, which he believes has informed and educated his ability to see. In creating these new paintings, he taught himself photography to create these images.

"In creating the images I used as the basis for this collection," Loeb continued, "I shot all the time, constantly looking through the camera instead of over it, searching for what has now become universally familiar, painting them as if I was the director. Focusing on both the narrative and scene setting, but careful never to interfere through instruction or forced lighting, I eventually managed to find ways to compose and capture these very specific 'personal film stills.' These images are solidified and codified through the act of painting them on canvas where they can be viewed as a new chapter in a conversation exemplified by artists as diverse as Vermeer, Balthus, Millais and Fischl, as well as the theatrical visions of the Lumière brothers and the language created by master directors like Hitchcock, Kubrick and Spielberg."

Among the highlights of Synesthesia, Parataxic Distortion, and the Shadow: A Show of Paintings by Damian Loeb is The High and the Mighty (2007), an oil on linen, which depicts an airplane view of the ground below in a colorful blur as the plane speeds past. The title is derived from the 1954 John Wayne drama in which everything that can go wrong does and portrays how people deal with the idea of disaster. It also is emblematic of the artist's dislike of flying.

M (2005), another of the large (36 x 84 inches), featured oils on linen in the exhibition, places the viewer in the swimming pool, eye-level to the water, peering at a young, blond girl in a blue print bikini as she sun bathes on her stomach while lying on a raft. She appears unaware that she is being watched. Loeb explains that the title comes from the 1931 film of the same name, directed by Fritz Lang and starring Peter Lorre, "about a nasty fellow who can't help but kill little girls….Lang does an incredible job of making you see through Peter Lorre's eyes and empathize with the character despite his evil as he is trapped like a rat by the underground people of the city and attempts to defend himself," he said.

Pareidolia (2008), is one of the smaller oil paintings on linen (12 x 24 inches) and another highlight of the exhibition; it is a skyscape of clouds set against a vivid blue sky; the title suggests the human predisposition to search for concrete and familiar images in otherwise random scenes. The term "pareidolia" refers to a psychological phenomenon that occurs when a vague or random stimulus, such as an image or a sound, is perceived as significant; for example, when a person thinks he or she sees face in a cloud or hears a hidden message when a record is played in reverse. 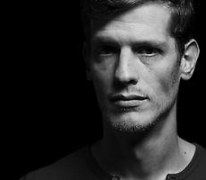