Born in Wilkes-Barre Pennsylvania, Franz Kline (1910 – 1962) first developed his interest in illustration during high school. In the 1930s he studied draftsmanship first at Boston University and then at Heathersley's Art School in London, before settling permanently in New York in 1939. In the late 1930s and early 1940s Kline worked figuratively, painting landscapes and cityscapes in addition to commissioned portraits and murals.

In 1948 Willem de Kooning suggested that Kline try to project one of his sketches with his Bell Opticon projector onto the wall. Kline described the process as he enlarged his drawing, "A four by five inch black drawing of a rocking chair … loomed in gigantic black strokes which eradicated any image, the strokes expanding as entities in themselves, unrelated to any entity but that of their own existence." The lines that delineated the image of the rocking chair were transformed into powerful, sweeping abstractions when enlarged at this scale. Inspired by the dramatic potential of his blown-up strokes, Kline adopted this style for his paintings.

Although Elaine de Kooning recounted this story as a "mythical" breakthrough, scholars have since established that Kline's development to abstraction was gradual. In the mid-1940s, many artists of the New York School, such as de Kooning, Jackson Pollock, Mark Rothko, and Barnett Newman, were exploring the expressive and visual potential of abstraction. Kline was particularly influenced by de Kooning's biomorphic black and white abstractions made between 1946 and 1949.

Kline had his breakthrough show at the Charles Egan Gallery in 1950, where he exhibited the dramatic black and white paintings that would become his signature style. Instead of focusing on representation, Kline emphasized the expressive potential of gestural brushwork. He painted these works with large housepainter's brushes to achieve a sense of spontaneous and energetic immediacy. Kline's gestural aesthetic quickly earned him the label of an "action painter" and he achieved recognition as one of the members of the emerging Abstract Expressionist movement. 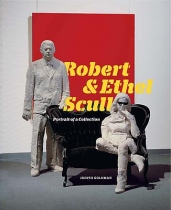