Jean-Michel Basquiat (1960-1988) was born in Brooklyn, New York to a mother of Puerto Rican descent and a father from Haiti; a cultural lineage that would shape and inform his artistic practice. A voracious autodidact, Basquiat drew from an eclectic group of sources to create his own unique visual vocabulary—from his Caribbean heritage and African cultural histories to graffiti and street art and classical and art historical themes to popular contemporary figures such as athletes and jazz musicians. This rich and complex layering defines Basquiat’s oeuvre; he juxtaposed academic references with street art techniques, contemporary icons with historical ones, and crude figures and references with jumbled poetic verses. His visceral, compelling images are characterized by a raw sense of immediacy which is heightened by accompanying words and messages—whether borrowed from poetry or names from ancient history—which were often crossed out, misspelled, or written in a childlike, primitive fashion. In his poetic, richly referential canvases, Basquiat explored themes of race and identity, history and politics, consumerism, celebrity, and the art world.

Beginning in childhood, the precocious young Basquiat took interest in art and taught himself how to draw. His mother supported his interest in art by enrolling him as a young member of the Brooklyn Museum of Art and by taking him to exhibitions in New York as a child. He also took an interest in anatomy at a young age, intently studying the textbook, Gray’s Anatomy, while recovering from serious injuries after being hit by a car. Basquiat dropped out of high school at age 17, which led his father to kick him out of the house and onto the streets of New York. At this time, Basquiat lived an itinerant existence, sleeping either on park benches or with friends. He sold postcards and clothing with his drawings on them to support himself while becoming immersed in the New York City underground scene of the city’s Lower East Side, becoming a musician in his own band and a renowned graffiti artist. Spray-painting enigmatic, witty and poetic phrases across downtown New York under the pseudonym SAMO©, an acronym that stood for “Same Old Shit” that he used in collaboration with his friend Al Diaz between 1977 and 1980, their work received widespread attention. When the duo decided to part ways, “SAMO© is Dead” appeared around New York.

In June 1980, Basquiat participated the group exhibition The Times Square Show; held in an abandoned former massage parlor on 41stStreet and Seventh Avenue, this landmark show featured artists like Keith Haring, Jenny Holzer, Kiki Smith, Kenny Scharf, who would come to define a new generation of the art world. Marking his transition from the streets to galleries, Basquiat began painting and drawing on more traditional materials, such as paper and canvas. In 1981, Basquiat appeared in Blondie’s “Rapture” music video; the band’s lead singer, Debbie Harry, bought one of his first paintings for $100. After his first solo exhibition that year and Rene Ricard’s influential article on his work, “The Radiant Child,” was published in Artforum, Basquiat rapidly began to gain commercial success and popularity. At the age of 21, in 1982, he became the youngest artist to exhibit at “Documenta 7” in Kassel, Germany, where he showed nearly sixty works. That year, Annina Nosei invited Basquiat to use the basement of her Prince Street gallery as his studio, where his works were later showed in his first solo exhibition in New York that March. AlthoughBasquiat began working in a studio, he continued to explore the immediacy and freeness of his street art aesthetic, and he would draw quickly and spontaneously—almost compulsively—throughout his career. Sometimes he spent days working without sleep and he would draw sporadically and continuously throughout the day on a notepad, even while in conversation.

1982 proved to be a watershed year for the young Basquiat, with a series of solo shows leading to his meteoric rise in success. He became well acquainted with famous art dealers, celebrities, and artists, becoming particularly close with Andy Warhol—the artists collaborated on a series of artworks in the mid-1980s. In 1985, Basquiat was featured on the cover of The New York Times magazine next to the caption, “New Art, New Money: The Marketing of the American Artist.” The 1980s saw the beginning and abrupt end of Basquiat’s short, yet prolific and rich career, characterized by rapid intermittent shifts of pace in Basquiat’s life; the steady constant being his prolific and evocative artwork. At only age 27, Basquiat was found dead of an accidental heroin overdose in his Lower East Side studio. His remarkable, genre-breaking career in painting only spanned eight years, but the impact of his art and legacy has influenced generations of younger artists. 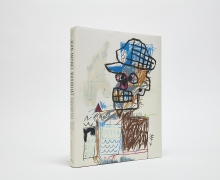